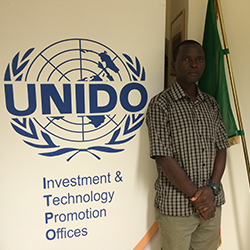 Starting from 12th of May until 12th of June, within the framework of the Delegate Programme, UNIDO ITPO Italy has hosted in Rome Mr. Gabriel Geras Landa, officer of Tanzania Private Sector Foundation (TPSF).

TPSF is an Association of enterprises and institutions working in numerous sectors (energy, agro-industry, infrastructural), created with the final goal of supporting the country’s Private Sector’s development. The realization of this support occurs trough the promotion of Investment Projects regarding SMEs, as well as the representation of private stakeholders’ interests in front of the Government.

Within the framework of the Environment and Energy project, the Delegate had the opportunity to present a 10 projects portfolio concerning several investment opportunities in the renewable energies’ field (mainly wind farms and photovoltaic) and in the environmental contest (waste processing especially for what concerned clinical waste). Within this context, UNIDO ITPO Italy has managed to arrange more than 50 bilateral meetings with different Italian enterprises, mainly active in the renewable energies and environmental sectors, as well as study tours and a range of other activities focused on capacity building in many Italian areas.

During his stay, Mr Landa had the possibility to visit an important company in Marche region, involved in the production of photovoltaic panels, and interested in new investments in Tanzania. The Delegate has also met a professor of Ancona’s Polytechnical Univeristy, to evaluate possible common synergies within the aeolian energy sector.

Thereafter Mr. Landa participated in a round table, arranged by “The New Energy” District, situated in Bari, where he had the opportunity to meet numerous apulian companies involved in the renewable energies sector. Many have shown great interest in investing in Tanzania, especially for what concerns aeolian and photovoltaic plants.

Finally, UNIDO ITPO Italy has organized and followed a study tour in Veneto, in collaboration with the Agency responsible for the export sector within Padua’s Chamber of Commerce and Industry. Mr. Landa had the possibility to encounter more than 20 regional enterprises, visiting many hybrid installations producing sites. The hybrid plant represents a valuable opportunity for the rural populations, especially when the energy supply comes from several renewable energy sources.

UNIDO ITPO Italy will continue supporting and remaining at disposal of the counterparts, with the aim of promoting commercial and investment partnerships, and of enduring Tanzania’s private sector’s framework, the real economic keystone and driving source of income for most of the population.