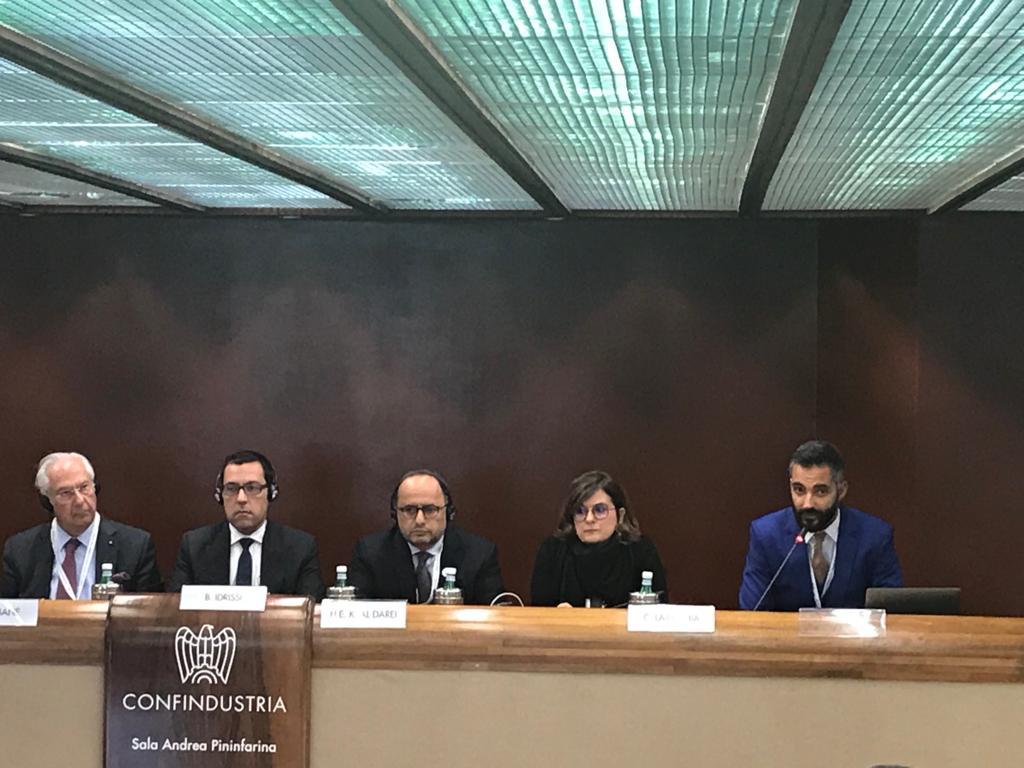 Rome, 17 October 2018. Innovation and development of agriculture in the MENA region represent challenges that can be faced and won also through international cooperation. It is in this perspective that UNIDO ITPO Italy took part in the second edition of the Italian Arab Business Forum organized by Joint Italian Arab Chamber, moderating a panel titled: “Food Industry: Sustainable Agriculture & Food Security”.

Starting from the morning institutional work the whole event has innovation as its central theme and saw the participation of undersecretary of Economic Development Minister Mr. Michele Geraci, the Minister of Foreign Affairs and International Cooperation Mr. Manlio Di Stefano, the President of Confindustria Mr. Vincenzo Boccia and by the Minister of Economy of EAU, Mr. Bin Saeed Al Mansoori, among others. More technical, instead, the panel moderated by UNIDO ITPO Italy, during which the nexus between innovation/food & agriculture/Arab countries was depicted.

In particular, the analysis of the current situation started from the expected growth of the population, that is around 2% per year (greater than the global average), from the increase of revenue and urbanization. All of these factors will play an important role in expanding the food demand. The climate element does not have to be disregarded: in Middle East and the North Africa summer temperatures will increase by more than the double of the global average in 2050. In the Moroccan plateau, rain could decrease by 40%, while it could rise in coast countries such as Yemen.

The challenges related to water are strictly linked to climate change: from 1950 until today, indeed, water resources per capita reduced of 75% decreasing to 1000 cube meters per year per capita in the Arab regions. Water shortage inevitably affects the food production also. Indeed, the opportunities for the expansions of the Arab land are limited. Excluding Sudan, the growth rate of the permanent cultivable land is very low. At the same time, it is expected that arable lands per capita will reach 0.12 hectares that is to say a 63% drop compared to 90s levels.

As far as concern the next challenges that have to be tackled, UNIDO ITPO Italy has presented some data related to different aspects i.e. the huge growth expected for the food demand in the area, the different national strategies in the Arab countries to diversify the economy and the national industry in order to be less dependent on food import. Finally, we presented some data on the strategic location of the Arab countries which, being among Africa, Asia and Europe, will play a role more and more important in the development of the region.

The following technologies are crucial to put an end to issues that we cannot put off any longer. We refer to drip irrigation, the use of technology in agriculture, to idro/aquaponics cultivation and soilless in general, to new farm cultivation and differentiation to the food consumed and to the use of improved seeds or to smart greenhouse cultivations to fight the climate change effects. Taking into account its integrated approach in addressing these challenges, its SMEs, its historic cultural affinity and excellent technology in the whole value chain including packaging and distribution, Italy can find great business opportunities not only at the national level but also in the Arab world.

UNIDO ITPO Italy office meets this challenge through the recurring joint activity between Italian enterprises and countries target, with a special focus on the disruptive role that technologies and innovative ideas can have on safety and food hygiene issues. Considering this aspect, the third edition of our award was presented. The event will take place in Bologna in May 2019.