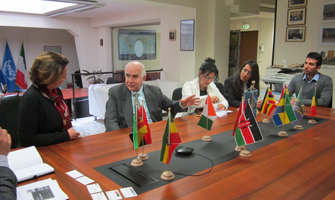 Rome, April 4 2013. The Director of UNIDO ITPO Italy, Diana Battaggia, met the Ambassador of Peru, H.E. Alfredo Arosemena Ferreyros, and the Alternate Representative to the UN Organization in Rome, Advisor Stella Chirinos, to discuss a series of initiatives aimed at promoting greater cooperation between Italian and Peruvian enterprises.

The main topic of discussion between Ms. Battaggia and the Peruvian delegation was the possibility of organizing a meeting between some Italian companies and the private investment promotion agency Proinversion. This meeting aims at promoting Proinversion’s recent projects, while creating a platform for dialogue that could favor greater collaboration between Italian and Peruvian entrepreneurs.

The projects involved focus on the industrial sectors of energy (electricity and hydrocarbons), transportation (railways and highways), agriculture, as well as civil works and large infrastructure.

Ms. Battaggia and H.E. Alfredo Arosemena Ferreyros agreed on the positive value that the proposed initiative would bring to both countries.

The promotion of Proinversion’s Peruvian projects is in line with UNIDO’s activities in Latin America, which have the purpose of fostering economic growth and improving living standards.