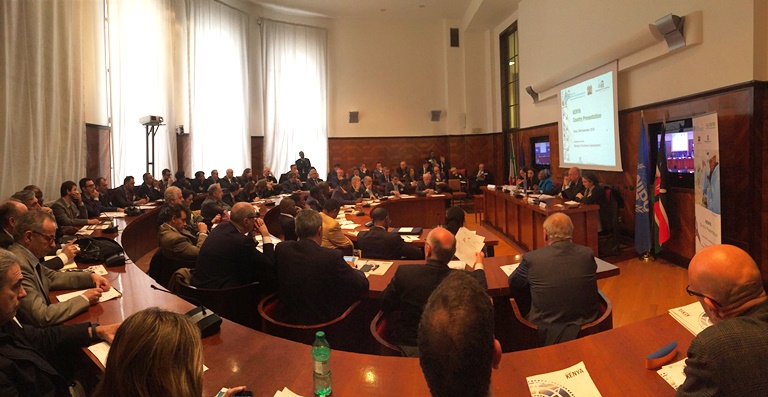 Rome, 24 November 2016 – Today at the premises of the Italian Ministry of Economic Development, took place the Kenya Country Presentation organized by UNIDO ITPO Italy in collaboration with the Embassy of Kenya in Italy.

The initiative, which is part of the support activities that UNIDO is providing to Kenyan Government, was attended by the Minister of Energy and Petroleum Hon. Charles Keter, who presented the opportunities offered by the African country due to the positive business climate guaranteed by the Kenyatta government, together with the policies on incentives and concessions to attract investment in the energy sector.

The Director of UNIDO ITPO Italy, Diana Battaggia, opened the Country Presentation with a speech in which she recalled the great potential of Kenya mainly due to the low average age of the population that enjoys a good level of education and human capital, that it is reflected by the presence of infrastructure and digitization over the country.

The Trade Attaché of the Embassy of Kenya in Italy, Mrs. Harriet M. Nduma, underlined during her speech the economic development and the progresses achieved by Kenya in recent years, thanks in particular to the implementation of major reforms. Then the Italian Ambassador in Kenya, H.E. Mauro Massoni, illustrated the high level of security reached by the country and the excellent relations existing between Italy and the Kenyatta government.

The Vice President of Confindustria Assafrica & Mediterranean, Dr. Ing. Antonio Monaco, who is also representative of Salini- Impregilo, took part in the discussion and exposed the great potential of the Kenyan market and opportunities for high yield investments in particular in the infrastructure sector.

At the end of the day, UNIDO has also supported the bilateral meeting between the Minister of Energy and Petroleum Hon. Charles Keter, and the CEO of Enel Green Power, Mr. Francesco Venturini, for future investments in Kenya by the main Italian company in the renewable energy sector. The Minister Keter had also a bilateral meeting with the Deputy Minister of Economic Development, Hon. Teresa Bellanova, in which he expressed the willingness to make deals and encourage investment and training activities by Italian companies in the field of power transmission. The Deputy Minister Bellanova for her part reiterated the Italy's spirit of cooperation, proposing a joint working group on these issues between the two ministries.